This morning I popped to the Essex coast for a nice almost flat traffic-free half marathon, from Walton past Frinton and Holland and back again, where possible using the upper and lower options available in the two directions. 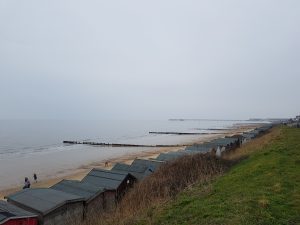 The weather was cloudy and hazy but a perfect temperature for a run, with only very light winds.

Although there was a lot of sand on the prom, in general the conditions were close to ideal, and I decided to see if I could push the pace a little. I let my Garmin be ruler of my speed, and with the exception of the first slightly faster mile (no walking), every mile was within 3 seconds of 8:47 (including my 40-second walk).

The net result was a new half-marathon PB of 1:55:37, knocking 42 seconds off my previous best, which was very satisfying, and another confidence booster with four weeks till London. There were a few cheerful “good morning” calls, but otherwise not a lot of crowd support today!

I wore my heart-rate monitor for the first time in a while, and it showed a very even heart-rate throughout (with even a fractional decrease in the second half) which seems like a good sign – I’ll try to remember to wear it for next week’s longer run and see if the same pattern continues into the fourth hour. 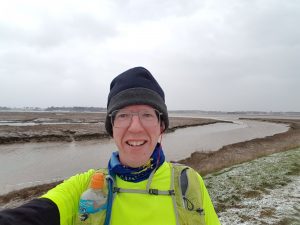 With five weeks till the London Marathon, I ran 31.3 km this morning, my longest run yet, in 3h14.

It snowed almost throughout but fortunately only very light, but the wind was gale-force so with the temperature below freezing (the Met Office said a “feels like” temperature of minus nine) it felt pretty chilly on my face but the rest of me was lovely and snug, wearing three layers on top (first time), leggings under trousers (first time) and a scarf/bandana (first time) and hat, with just the one pair of thick gloves. 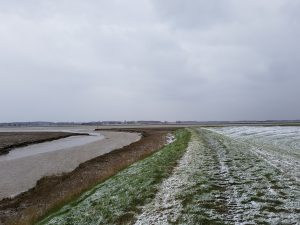 About a third of the run was on tracks and footpaths, and much of that was the really exposed bit including along the top of the river wall for a few kilometres which was right into the face of the gale, but giving some expansive views.

For my longest run, this was surprisingly easy, all the more so in less than ideal conditions with lots of extra clothing (albeit that I wasn’t pushing the pace), and with the second half almost two minutes faster than the first, so I was really pleased. 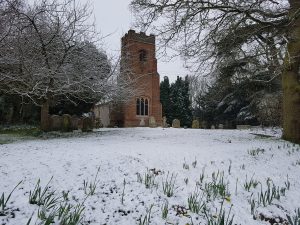 I realised afterwards that my little out-and-back foray towards Hemley was longer than planned (I mustn’t have noticed my watch beeping to tell me I was off course) so the run was 31.3km rather than the planned 30.3km. That didn’t really matter except that as I neared the expected distance on my Garmin watch, there was no sign of the car and it gradually dawned on me that I still had some way to go – that last kilometre was therefore a bit harder mentally than it needed to be.

This was less than 7 miles short of the marathon distance, and for the first time me finishing successfully is no longer an abstract concept but something I can now visualise myself doing. 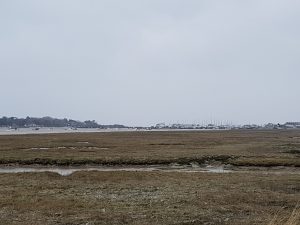 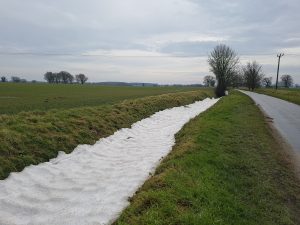 28km this morning, my longest yet. I found it went in four phases, perhaps more mental than physical.

First it was easy, as any run will be to start with. Second it turned hard with my legs no longer fresh and as I became aware of still how far it was to go. Third it became more comfortable again as the legs became metronomic, before finally turning tough but manageable near the end.

Long gentle inclines (even less than 1% slope) still get to me, particularly if the road is fairly straight too – my head tells me it’s level and that I should be able to maintain my normal pace without difficulty, but my legs disagree.

I ran slightly faster than intended, and managed to maintain that pace right to the end so that was very encouraging.

It was mostly on roads to the north of home with a lot of flooding to negotiate, with a little bit on field paths which were rather muddy and I lost my shoe once. 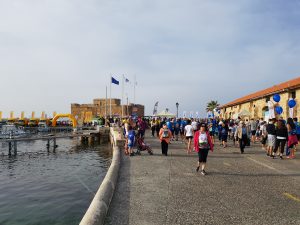 Seven weeks to go till the London Marathon, and my training plan had suggested a half-marathon race, and somehow that got turned into a short holiday to Cyprus. It was an early start on Sunday morning to get to the Cyprus half in Paphos by 7.40. I was able to use a loo in the car park, which was a good move as there were long queues down near the start. I had my second banana of the morning, topped up water, and then headed down to the harbour. 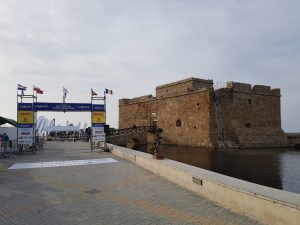 The start and finish were by the castle at the harbour, and though very familiar to me, still a great spot. The marathon runners had started at Aphrodite’s Rock at 7.30, but the start area for the rest of us was a little busy with HM, 10k and 5k runners all milling about together, but absent any instructions I headed as close as I could get to the start line, which proved a sensible move. 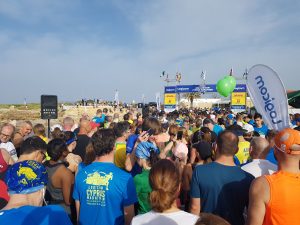 The temperature was unseasonably warm, being 19 when we set off – I’m not sure what it was later in the race but it reached 26 later in the day.

I wasn’t sure how fast I should run in the warmth and took it a little easy to start, and chose to adopt my run/walk strategy once again – run for a mile, then walk for about 40 seconds. I used this to set my personal bests at 10 miles and half-marathon, though on long training runs where the pace is lower, I stick to pure running. Not only does the short walk break, if adopted right from the very beginning, allow the legs to recover before they get too tired, and thus achieve a faster average pace than continuous running, it also makes drinking and eating gels or other foods much easier (even more so in races where the drink is in a cup rather than a bottle), but by being fairly regimented about the structure, it stops the temptation to walk for too long or too often. 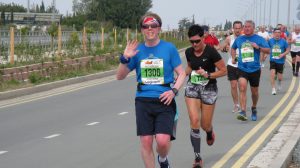 Lucy and my parents had driven out to a roundabout on the course, which thanks to the doubling back of the route, meant that with virtually no movement they were at the 5km, 9km and 16km points, which meant for good support and also the opportunity to be refuelled twice: I deliberately timed my walk breaks to be as I passed them at 5 and 16 kilometres.

After reaching the high point, 60 metres above sea level, after 12.5km, I realised I wasn’t far off PB pace and was feeling good, so pushed myself quite hard, skipping the walk break at mile 8 as it was downhill, and having one at about mile 11½ instead of 11 and 12, and really trying to push the pace. It is amazing how a trivial upwards slope of less than 1% still feels vertiginous towards the end of a race – I’d never noticed that the coastal road past the hotels is fractionally uphill, but now I did as I fought to gain a few extra seconds.

I found I couldn’t quite make up the missing time, though, despite finishing with a 4:24/km sprint which passed a few people, with shouts of support from friends coming as I neared the line. I finished 13 seconds off my target, in 1:56:19. However, I subsequently realised that my PB was 1:56:26, not :06, and so it was a new PB by 7 seconds which is fabulous, and makes that sprint finish doubly worthwhile. 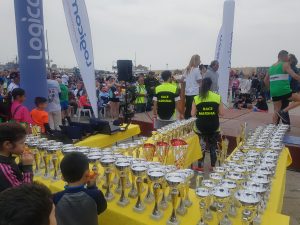 My last three halfs have all been within 7 seconds of each other, so good consistency too. A really satisfying result in the heat. I stopped to recover for a few minutes, and admired the astonishing array of trophies for the various age categories.

A great morning, and more marathon nutrition practice too. As a practice run for London, as an event in its own right, and as something to experience with family and friends, a success on all counts.

Then back to our villa with friends and family for well earned drinks, food, and a very bracing swim.