So, just 8 weeks to go till the London Marathon. So, how are things going? A good week, I think.

During the week, some hill intervals on the treadmill, a good paced 10km, some speed intervals, a swim and a good cycle. Then on Saturday I took the car to Melton and then the train into Ipswich, followed by a slightly looping 25km back to Melton, my longest run yet. It was a cold morning so I was kitted out in tracksuit bottoms, my warm winter top, a fluorescent top over that, my warmest gel gloves, and a fleecy hat, plus my Camelbak for water and to carry fuel. Possibly the most I’ve ever worn for a run. 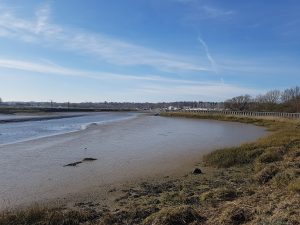 There was a good deal of suburbia but I enjoyed the docks/marina at Ipswich, several parks, the minor thrill of finding a pavement added to a road since the Google Streetview car had been along, exploring some of the heathland at Martlesham Heath (most of it now being housing estate), running through woods, views of Martlesham Creek, a visit to bits of Woodbridge familiar from over 26 years ago, into Melton, round the back along some rural footpaths, a train leaping out at me from behind a tree, and finishing by the River Deben.

I also practised fuelling strategy, taking on Lucozade Sport drink that’ll be at the marathon (note: do not get this in your eye, it stings like hell) and for the first time a Lucozade Sport gel (much sweeter than the Sport in Science ones I usually use, but acceptable). I also had my planned pre-marathon breakfast at about the right time, and no problems experienced. I even added to the reality of the occasion by waking up before 5am and being unable to get back to sleep. 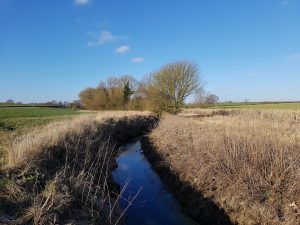 Sunday I went out to the headwaters of the River Gipping for a relatively gentle 11.5km recovery run, which went very well – no effects from the previous day’s long run.

I’ve run personal record distances for each of the last three weeks, running over 59 km this week just gone, as well as nudging the longest run up a smidgen. However, 42.2km still seems like an awfully long way! Work still to do.