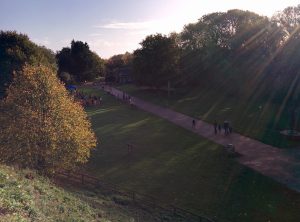 Clare Castle parkrun in SW Suffolk today for my parkrun tourism. It was just its fourth run, and so had been my nearest not visited. The run here allowed me to complete the Suffolk parkruns once again.

The route is around the country park, a spot I’ve been to a number of times, with the delightful site including the eponymous motte and bailey castle, as well as the former Clare railway station, and sits alongside the River Stour, with the parkrun crossing the river six times. It’s a varied route, a lot among trees, the majority on rough tarmac or concrete, but a fair bit that’s along the old railway line is on gravel/dirt/leaves, plus some grass. The slightly more challenging footing contributed to me being almost a minute slower than Southend last week.

Afterwards I climbed up the motte to the castle, from where there was a grand view down onto the finish area.

So, that was different parkrun location number 49 – I’m not sure whether number 50 is coming next week.