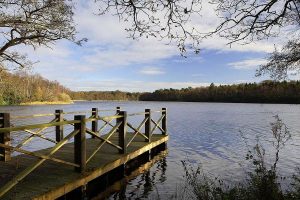 Plans to visit Clacton parkrun with Claire were put on hold for several reasons, and so I decided to head north to avoid the rain, selecting Fritton Lake parkrun, between Beccles and Great Yarmouth.

Located on a private estate used among other things for outdoor activities and woodland lodges, the signage on arrival was poor, but by the expedient of following others I found myself in the right carpark. Later, at the start line, there was an announcement that the current system of parking permits was being changed to allow the display of a parkrun barcode in the car to authorise parking. There was no information that I saw at the carpark, and certainly none at all on the website, that referred either the old or the new system.

I wandered from the car to the start area, and hung about waiting for the new runners briefing. Maybe I missed it, but if so it was very subtle – I suspect there wasn’t one since when we assembled at the start line, some of the core elements of a new runners briefing were there, but in the worst implementation I’ve yet seen: it didn’t greatly matter to me, but for a genuinely new runner, the “passive welcome” was lacking even if any active welcome from individual enquiries might have been great.

The route was described as “broadly two different figures of eight, overlaid” which was far from helpful, but it’s not unusual for me to run a new parkrun without understanding the route in advance: usually it’s just a question of following the people in front, well supplemented by signs and marshals.

Most of the route was through woodland, at times with views of the lake, with quite a few tree roots and holes to avoid, plus a bit of bracken, bramble and nettle to skirt round in a few places, but nothing difficult in very dry conditions.

However, the route-finding was far from obvious once I lost sight of the people in front of me. Bring a compass and orienteering skills! It turned out I went the right way but I had long periods of doubt, and there was luck involved. There was no-one in front of me for significant stretches with multiple possible turnings and though I checked and there were people behind, I worried they were following me blindly. When Natasha Rout who had been following and eventually overtook then called “which way?” at a fork, I had no idea!

I found myself thinking of Mo Farrah’s final 10k track race on Friday night, and every time the Natasha who was on my shoulder for quite a while pushed the pace a little, I pushed back a little harder. Very motivating, until she inched past me and then I started to run out of energy a few hundred metres from the end. Unlike Mo, I lost by 15 seconds, but still a good run.

Final time 24:43 and 19th out of 71 – not my best by some margin, but a moderately tiring week and a rather twisty course with roots and holes to watch out for. Hopefully I haven’t tired my legs too much for the planned 10-mile run tomorrow morning.

More signage and/or marshalls needed, but a lovely spot for a run (in dry weather, anyway).