After an emotional rollercoaster of an evening at the World Athletics Championships in London last night, today it was time for my own athletic effort, the Great Yarmouth Half Marathon.

It was a very well organised and incredibly friendly race thanks to the Great Yarmouth Road Runners – really friendly and helpful at race HQ, and really superb marshalling: lots of noisy encouragement (static and on bicycles and motorbikes), plenty of water to drink, plus cooling hosepipes and jelly babies if wanted. 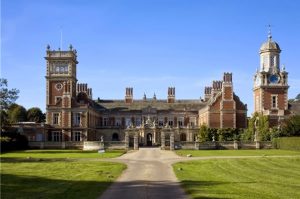 Despite the name, the race doesn’t visit the town of Great Yarmouth (presumably gaining its name from the running club rather than the town), starting and finishing in Gorleston and taking mainly rural lanes to the south and west, and incorporating the grounds of Somerleyton Hall: I’ve pinched the picture – it wasn’t mine, but I tried to take in the view as I passed, as it’s so easy even on the most picturesque runs, especially when running hard or to a fixed pace, to fail to take in one’s surroundings.

It was my first half-marathon race using a run/walk technique – every mile, I walk briskly for about 35 seconds, to give my legs just a little time to recover, also giving the opportunity to drink from plastic cups while walking, and consume any gels etc. at a walk rather than run. I used the approach for a 10-mile race at the Lee Valley Velopark in the spring, and set a new PB with it, then signally failed to do so at the London 10-mile when I reverted to full-time running, and I’ve become a convert to run/walk on distances longer than 10km.

I had quite a while to chat (in short bursts) about the approach with one runner, Donna Crake, as we passed each other a total of 14 times. I think she was intrigued though perhaps not persuaded, but subsequent online discussion elsewhere seems to have caught the attention of another runner who is going to try it shortly in a long training run. 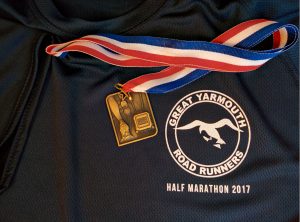 I was aiming for 2:03 which would have been my best HM time this year, and consistent with the plan to PB at Snetterton in November, but I felt good early on, and pushed the pace a little, then felt great after half-way so pushed it further to run negative splits, and finished in 1:59:06, a new PB, despite all my previous half-marathon races being fully run rather than run/walk. The beaten PB is from the Reading Half in 2010 so there is life in the old legs yet, and it was 6 minutes better than my training run half-marathons this year. Really pleased with that.

After resting for a short while and eating my post-race banana and drinking my water, I spent some time afterwards with a first-aider as I had pins and needles the length of both arms and hands, a first for me (other than when associated with migraine), but it passed in about 15 minutes with rest and gentle exercise. The first-aider was very calm and reassuring. She suggested it was most likely to be caused by keeping my arms a bit too bent while running too much of the time, and I do work them quite hard towards the end of long runs as a means of maintaining or increasing the speed when my legs start to tire.

I had my protein recovery drink, another thing that I’ve become a convert to, then returned to the race HQ (a school) where the friendly volunteers returned my bag and I had a shower and changed into clean and dry clothes – a very civilised thing to be able to do after a run, and not something I’ve previously been able to do.

Congratulations to the Great Yarmouth Road Runners on a superb morning.

3 Replies to “Great Yarmouth Half Marathon”