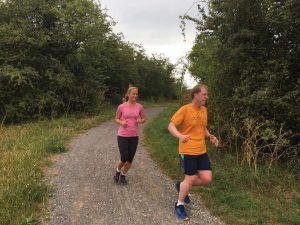 My 43rd parkrun location was Hadleigh in Essex. I’d been here once before, in January, for the Legacy 10k on the Olympic mountain bike course, the hardest 10k I’ve done by some margin.

The parkrun was easier, but still quite challenging. It starts off with a lot of downhill, initially with hairpin bends and then more than 20 more gentle zigs and zags to descend still steeply, regains a bit of height then loses more to get down to the level of the marshes. A fairly level section near the railway line is followed by an ascent on grass which I’d been warned about but which didn’t seem too demanding in the circumstances, and then a long steep ascent back up those “gentle” zig zags which seemed far from gentle on the way up, the gradient peaking at around 17%.

The woman in pink in the photo chased me for much of the run, tending to be slightly faster on the flat but slightly slower on descents and some ascents, but in the end she had more in the tank for the long uphill slog.

I finished in an official 26:20, not too bad in the circumstances but more than two minutes slower than Bury last week.

After I’d recovered and cheered over the line a good few finishers, I jogged back down the hill to find Claire who was tail-runner today, or tail-walker as we should apparently now call the role. I would encourage people to come to parkrun who are combining running and walking, and wouldn’t turn away someone who wanted to walk it, but I’m less convinced that parkrun should be encouraging people who want a Saturday morning walk, but that’s a decision that has a range of passionately held views.

Afterwards, Claire and I had cake in the café, joined by Roderick Hoffman, a parkrun tourist for whom this was event number 199, with Beckenham Place reserved for his 200th in three weeks. He had a lot of interesting stories to tell about his 199 events. My medium-term target remains to visit all of the East of England parkruns, though that’s a moving feast with Billericay added last week and Clare and Haverhill probably not far away.

One Reply to “Hadleigh – parkrun location 43”