This morning the King’s Forest Half Marathon, my first trail half. Or rather, half and a bit as it was long: the race director said 13.71 miles though I measured it a bit less.

I arrived in good time at West Stow Country Park and put the car in the overflow car park, missing a huge hole which would have got the car stuck and possibly damaged it – it may be a field, but it is a field signed as a car park, and while I wasn’t expecting ‘flat’ I wasn’t expecting such a large hole, either.

I picked up my registration pack which included a bold orange t-shirt, which will get more use for routine runs than array of darker colours I’m starting to collect. There was also a chunky chip-timing device which I strapped to my ankle. I returned to the car and pinned on my race number.

I chose to wear my hydration backpack today, as it was a warm day and there were just two water stations. There is a lot of advice about not making sudden changes to footwear, clothing, nutrition, and so on, between training and racing. Well, the hydration backpack has rapidly become something I rely on during longer runs, and despite the minor penalty of running with an extra 1.5kg on my back, I think there’s a lot to be said for sticking with what’s familiar and what works.

We assembled near the start for the pre-race briefing, given by a chap with possibly the loudest voice I’ve heard. There was good news and bad news. The bad news was that with a slight change of route to avoid knee-high nettles and brambles, he’d measured the course at 13.7 miles. (To be fair, the publicity had always made it clear that the distance was approximate.) The good news was that it was a lovely sunny day.

And so we were off promptly at 10.30am, an hour behind the marathon runners. I had expected that the fastest of the marathoners would catch me up near the end of the route (as they were doing two laps of the half-marathon course) but that didn’t happen. 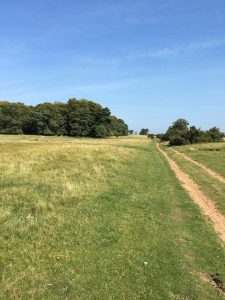 We started along the River Lark, including alongside a lake, mostly firm footing with a small bit of mud and a couple of gates. Then we crossed the road and took to field-edge paths to Icklingham. I found that I was going too fast, but struggled to slow down, and once I’d done my first 40-second walk break found that I was between people on narrow trods, which made me want to avoid getting in the way by slowing down.

After the first drinks station at Icklingham, we turned north and the start of a long gentle climb across breckland. It was lovely scenery, but still I was going too fast given the ascent. 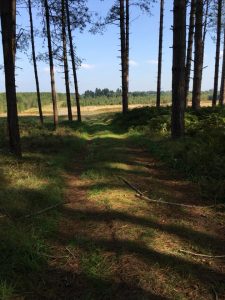 There were quite a few large puddles on the level ground at the top, and some sandy, gravely patches from time to time, but mostly the going was not too demanding.

We eventually turned into the eponymous forest, with some challenging running initially, on a hogsback of a section which descended and ascended every few metres. After the second drinks station, I ended up at the back of a procession of five along a narrow trod, which worked quite well, but I was now starting to tire.

The remainder through the forest did at least benefit from quite a lot of shade on a warm day, but it was increasingly hard work and my pace slowed. A woman who I’d caught up coming out of Icklingham, and who had then got away from me, was having problems with her knee, and we passed and re-passed each other several times, before I eventually kept ahead.

At various points, the route through the King’s Forest was in familiar places, albeit often from an unfamiliar direction. We eventually emerged to cross the road for the second time. I passed the magic 21.1km and soon there was the sound of strong applause, and I realised it was for me as I powered over the finish line.

2:08 was my second slowest half (my first attempt at Reading being 2:10 but the last 4km or so of that was walked when my knee gave way), but my position of 39th of 101 was my best relative position in a half (first time in the top 50%), and I suppose a trail HM PB (and also my longest race as it was measured slightly long).

A trail should be expected to be harder, and I should be satisfied, but I was a bit frustrated, in part because I had failed to pace myself well enough. Looking back, I probably did too much running in the last fortnight, too, plus a very cold swim on Thursday took more out of me than I’d realised, so all in all I wasn’t quite 100% at the start line.

A great welcome at the end, and lots of cake.