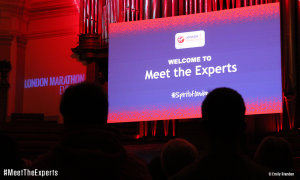 The organisers of the Virgin Money London Marathon put on an event called “Meet the Experts”, an opportunity to hear from a range of experts to help those attending (almost exclusively first timers such as myself) to be better prepared by the time we get to 22nd April, as well as entertaining and inspiring us with some noteworthy previous runners. I got a free ticket through my charity, Guide Dogs. I wasn’t sure it was going to be worth trekking into London, but it proved to be very worthwhile.

Before the main session in the lecture hall, I had my feet measured for the first time in many, many years, and possibly the first time with such precision. My right foot is a 9.6 and my left a 10.4; my right is slightly wider than normal and my left about normal; my right is more arched than my left. I had my gait analysed, though with such a short runway, rather than a treadmill, I’m not sure how representative it was: the sponsors New Balance then tried to sell me new shoes based on their analysis, but nothing seemed quite right, and this close to the marathon it’s probably best to stick to what I know anyway. I already have four pairs of running shoes in action at the moment, which should be enough.

So, in addition to the entertainment and inspiration from some of the speakers, what did I learn today? Lots of little bits and pieces, some relevant to the next 11 weeks, others to the day itself. Quite a few things weren’t new to me, but hearing them afresh should stimulate me to do something about them. Though I may have mentally absorbed a few other things too, here’s what I noted down, together with some actions or notes to myself: