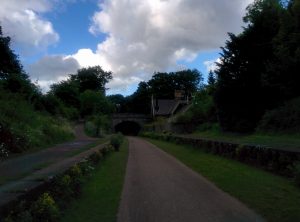 This week’s runs have seen me on the Thames towpath just south of Oxford, from home to Drinkstone and back, knocking five minutes off my Thetford parkrun PB from two years ago, and then today’s big one.

I was travelling to near Manchester, so I’d always thought that if the weather was good I might spend some time walking or running in the Peak District. As I was late away from home, I decided that a run would be a good option, and had selected the Monsal Trail near Buxton, a former railway line now restored for use by walkers, cyclists and horse riders (I note they rarely say runners), with several tunnels and high bridges. 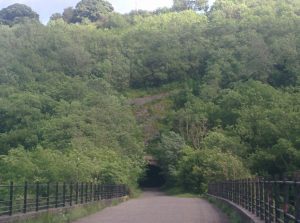 I had planned a 10-12km run, but once out I found the idea of making it a bit longer grew on me – perhaps because most of the planned first 5km was gently downhill so it was bound to feel relatively easy. I turned round at 8km with the possibility of a 10-mile run, but on the return leg I decided to push on. Of course, the way back was gently uphill, but although I was a little slower it wasn’t excessively hard, and so I ran on past the car at Millers Dale, ran to the western end of the Trail and turned back to the car. 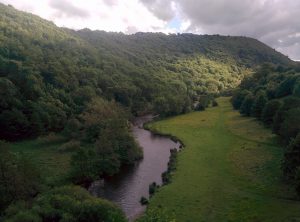 Total distance was about 21.7km, a smidgen over a half-marathon and my longest run yet. I was tired but not wiped out, and indeed the worst outcome was once again sore patches on my lower back/upper bottom from my sweaty shorts. As I didn’t wear my running belt (having the hydration vest on) I can eliminate that as a potential cause. It is the shorts. More testing is needed to determine whether it is this particular design (I have two identical pairs which I use for almost all my running at the moment) or something generic to me.

But the ability to just choose to run a half-marathon distance almost at will is very encouraging. Running twice as far still seems an awfully long way, but there’s time to build up to that, and I needn’t run quite as fast. 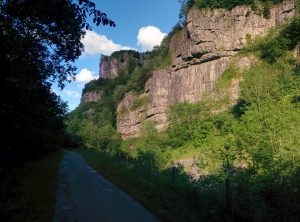 The scenery of the run was delightful with steep gorges and flowery meadows, the railway line cut into shelves on the side of the hill, striding across the river on high bridges, and many tunnels – I was impressed with how well the Garmin coped with those, presumably reverting to its “run indoor” mode relying on my arm swings until it could get a GPS fix again when I emerged.