The picture is at Languard Point, with the sea behind me, the exit of Harwich Harbour to the left, and shows a bit of the nature reserve, cluttered with the accumulated remains of several centuries of military defences and hemmed in by the Port of Felixstowe behind and the seaside world of leisure away to the right. The boardwalk is really bouncy to run on – great fun. A lovely spot.

My longer Sunday runs have been around the lanes near home for quite a few weeks, and while each has been somewhere different and included new roads, there has been a certain sameness about them, and it was time to shake things up a bit. 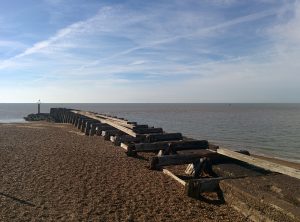 So this morning it was ho! to Felixstowe for a visit to the seaside – not entirely novel as I’ve run here a few times before, but not for a while. I ran south-west to the tip of Landguard Point, then retraced my steps and continued north-east to the first Martello Tower then along the prom, past the pier for a while before turning to run back to the car. By the time I finished just after 9am it was 23° and there were already sunbathers out, with lots of other people taking a stroll on the prom, together with a few other runners.

There were the smells of rubber from things being inflated, of cooking food, and of chlorine from the leisure centre. The last is a bit of an obstacle at the moment as the prom has been closed since last June for a short distance to allow some works to be carried out, which means a little diversion around the leisure centre, a route that has confused my Garmin each time I’ve done it.

The intention was for a run of 8km at 5:37/km but my legs felt great after a gentle week and I committed one of the sins of the taper period and ran both further and faster, but not too seriously so. I will need to be very careful to rest properly towards the end of this coming week, but no harm done today. It did at least have the benefit of giving me fresh confidence as there was so much in the tank to push a little harder and plenty of energy when I finished. It has left me in fresh doubt though about whether to adopt the run-walk strategy that I used successfully on my 10-mile race at the Lee Valley Velopark (and last Sunday’s 15.3km) or to return to my more normal “run it all” approach and trust to the energy gained from the taper and the occasion to see me through. Something to ponder.