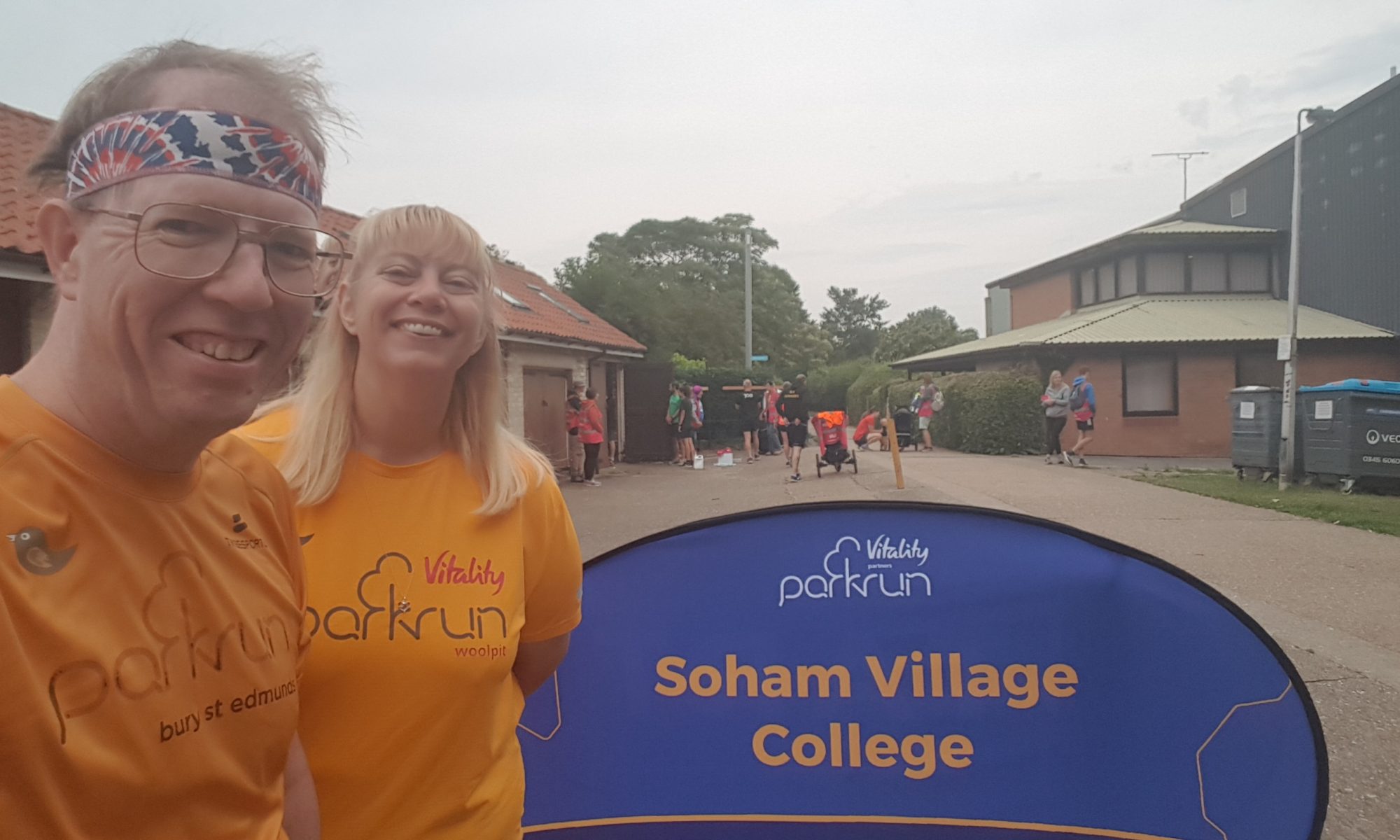 So, parkrun returned after the 16-month Covid “pause” on 24 July 2021, and it saw Lucy and me travel to Soham Village College for their 18th event. It was both reassuringly familiar and very strange, being around people again, not sure how close was socially acceptable. The Run Director did his briefing fairly quickly, and if not entirely consistent with the parkrun Covid protocol, then largely following the spirit of it. And then we were off for the run itself, which was just like always – great to be out in the open air with others, great to be able to thank the volunteers, and to go home happy and satisfied, and in the case of we tourists, with another new location ticked off.

My gradual ambition was to visit the remaining events in the East of England region, to reclaim my “regionnaire” status – that is, having run all the parkruns in the region (which is made up of Bedfordshire, Cambridgeshire, Essex, Hertfordshire, Norfolk, and Suffolk). It’s naturally a moving feast since there are new parkruns starting from time to time (and occasionally closing).

I’d visited Great Yarmouth North Beach in February 2020, but by the time Covid got in the way, I was missing four: Soham Village College (started November 2019), Fulbourn Hospital (December 2019), Chalkwell Beach (February 2020) and Wickford Memorial (February 2020) – though Lucy had visited the last two. So the restart of parkrun had seen SVC crossed off, but Fulbourn Hospital would have to wait as permission from the landowners wasn’t immediately forthcoming. But still four events to visit, because of Chilton Fields…

The restart of parkrun in England on 24 July generally had also brought a new event starting that day, our new NENDY (Nearest Event Not Done Yet), Chilton Fields, but we kept that for a couple of weeks until we wanted one close to home, duly visited on 7 August – a surprisingly varied and pleasant route, more interesting than the map had suggested. This was the location of Lucy’s 50th parkrun at her 50th different location, thus gaining her membership of the Hoffman Club, with Roderick Hoffman himself coming to Chilton Fields to welcome Lucy, plus fellow member Charlene Gower and her partner Ash. Still four events to go for the region as Storeys Field has started…

Another new one, Storeys Field in Cambridge, began in July and was visited in August, but that still left me three to do including the still-closed Fulbourn Hospital. Storeys Field was an almost-flat route on the western edge of Cambridge, with a great atmosphere – and quidditch hoops on the walk from the car park. We were recognised by tourists who’d also been at Exmouth where we’d run the previous Saturday. But making progress, back to only three to go.

On 18 September, I met friend Claire at Chalkwell Beach, a pancake-flat run along the prom, always a favourite for me, hindered just a little in this case by the large number of dinghies being prepared for launch and blocking the route. After my run, I jogged back to run in with Claire, and afterwards we had an excellent breakfast at a cafe on the seafront. Still three to go, as Sandringham had started.

On 2 October, Flegg High started and I visited that day – a pleasant run combining school playing fields and a twisting route around other parts of the school estate. The RD amusingly confirmed what so many of us already knew that “It’s a race, not a run” in the pre-race briefing. I continued afterwards with a run to the seaside at Winterton, and back, rounding the morning out nicely, but somewhat shockingly when I saw how much less of the seaside there was at Winterton than on my previous visit, with the sea having eaten away many metres of the land. So, another parkrun location visited, but by this time I’d actually gone backwards in my quest as meanwhile Henlow Bridge Lakes and Harleston Magpies had started, so now five to go (including Fulbourn Hospital which was still closed).

16 October saw Lucy and me travel to Sandringham for a delightful two-lapper around the royal estate, somewhat hampered in my case by a chest infection leaving me a bit short of breath and a confused GPS watch which misled me as to how fast I was going causing me to rather overdo it and completing the last two kilometres with a worrying amount of wheezing. A very good, if smallish, bacon bap afterwards, too, before Lucy headed for an agility trial. Making progress again, just four to do.

On 6 November Lucy and I travelled at last to the finally reopened Fulbourn Hospital, and met with our friend Helen for the first time in some while; I ran round with Helen catching up on news, and then the two of us jogged back to find Lucy and run in the last bit with her. A deceptively challenging grassy route around the grounds of the mental hospital. Still three to go, as Alton Water started today.

A fortnight later we visited Alton Water, by the reservoir of that name just south of Ipswich. A very pleasant route, mostly on grass with some awkward cambers, but views across the water where I learned to sail, and of the Highland cattle. Still three – Markshall Estate has started.

The following Saturday I travelled to the Suffolk/Norfolk border and Harleston Magpies Hockey Club – I had a warm-up run in the rain to the bridge over the country boundary, but the rain had stopped by parkrun time. I chatted with Charlene and Ash, who’d been to Markshall Estate the previous week (and subtly corrected my pronunciation of it – imagine it is spelled Mark’s Hall, and you’ll be right) and had a decent run around the convoluted grassy route, which was surprisingly firm despite the rain. Just two to go now – back to where I was in February 2020.

On 4 December I travelled to Essex for Wickford Memorial, two and a half laps of the park, partly running alongside the infant River Crouch, but having been put in a ditch it’s not particularly attractive. Just one to go now…

And on 13 December, with no further new parkruns announced, I travelled to Markshall Estate with Brindley, his first parkrun since Whitehaven in September. He’s very enthusiastic, and the challenge is to slow him down enough at the start that he still has some energy by the end. Today, with a 10-minute walk/jog to the start, he was really raring to go – amazingly, as a dog who can get very anxious around other dogs and people, parkrun doesn’t seem to faze him. A very attractive two laps of the estate, mostly on rather uneven broken concrete roads with quite a bit of mud and puddle for Brindley to get himself into quite a state.

So regionnaire status regained – and at the moment I am the only person who’s visited all 88 current parkruns in the East of England (I’ve actually visited 92, including 4 that are now closed).

No doubt more new parkruns will follow – I’m aware that Mildenhall is in the planning stages and there will probably be others I haven’t heard about. But that’s part of the joy of it. Occasional new ones will follow around the edges and elsewhere in the country when away for other reasons, and of course repeats for me as Lucy makes her way towards 100 in 100. Lots to look forward to.