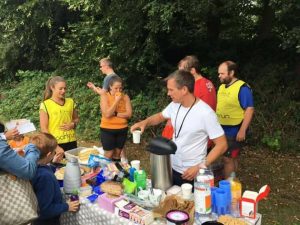 A visit this morning to Loughton, in Essex but for country bumpkins feeling like the NE edge of London, for the Roding Valley parkrun – my parkrun location 44. The run is around a park/recreation ground next to the eponymous river: flat and a mixture of grass and tarmac plus four bridges. Easy-going for a run and pleasant enough without any real thrills.

I didn’t feel in tip-top condition (and was desperate for a pee), but I wasn’t going to let the 25-minute pacer stay in front of me for too long even if she did seem to be going rather fast. I pulled past her and though after the first km it became clear I was going “too fast” I tried to keep it up and latched onto a young girl who unwittingly pulled me along for the first 4km before she accelerated slightly while my legs really started to complain and I slowed slightly.

I stopped my watch after it had recorded 5km, giving me a final time of 23:22 knocking 9 seconds off my 5km PB. Really pleased with that. The official time was 23:31 which was also a parkrun PB – by one second.

I jogged back to run the last few hundred metres with Claire, then we had cake for Roding Valley parkrun’s sixth-month anniversary: really excellent it was, too.