With a holiday of over a week in the USA planned, I wanted to do some running while I was there. The holiday started with a day in San Francisco, where there are some good running spots, but I was very tired from the long journey to get there, we had a packed day as it was to make the most of a fascinating city in  a day, and there was no good running near our hotel, so that pleasure is indefinitely postponed.

So, after 33 hours on the California Zephyr AMTRAK train we reached Denver, Colorado and the neighbouring Aurora, which gave me the opportunity for a run, albeit not very thrilling. I managed 3½ laps of two blocks around the airport hotel, which had the novelty of being my furthest west run and my highest at around 5000 feet above sea level. I didn’t notice any significant impact from the altitude. 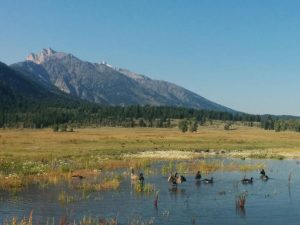 A couple of days later, after the remarkable spectacle of a total eclipse of the sun and a beautiful visit to the Rocky Mountains National Park, we reached Teton Village on the edge of the Grand Teton National Park. In among other activities, I went for a beautiful run. It was 28°C and now at 6300 feet above sea level so I took it easy, giving plenty of time to admire the glorious views to the Tetons.

More of the sights of America in the Teton National Park, Yellowstone National Park, and the Craters of the Moon National Monument, before reaching Boise, Idaho. The final morning before starting the journey back to the UK gave time for 6km along the Boise Greenway either side of the Boise River, starting before dawn. It wasn’t as interesting as the map had hinted, as there was little to see of the river from the paths on either side, vegetation blocking the views, but still pleasant to be out before the heat of the day, and this became my new “furthest west” run.

A few years ago, a holiday in a series of strange places, and the temptation of the hotel bed would have meant a holiday from running, but now I’m pleased to be taking advantage of the opportunities to run somewhere new, without letting it dominate the holiday.