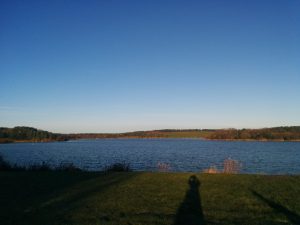 My 52nd parkrun location for this morning was an icy Druridge Bay, the most northerly parkrun in England while we were spending a weekend in Northumberland. While I was waiting in the cold and then running, Lucy took the dogs for a walk along the beach and found a couple of geocaches.

The route is two (well, about 1.9) very attractive laps of the lake, with some gentle undulations, some in the woods and some more open. And in the frozen north it was my first parkrun in a hat.

There were a few icy patches, but it was possible to find a route around them all without much difficulty.

I’d intended to take it relatively easy, but once I got warmed up I found someone to chase (thank you Jilly Bell), and she pulled me round increasingly quickly so the second lap was 40 secs per km faster than the first (and didn’t need a hat). Good start to the day.