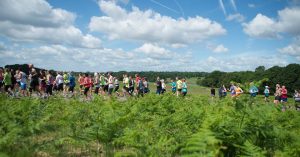 Today was the day that running training for the last 17 weeks has, at least nominally, been heading towards. Although I would have been going out running anyway, I’ve been working to an Mbition training plan with today’s London 10 Mile in Richmond Park (originally advertised as the Royal Parks 10) as the objective. I successfully ran all 51 of my training runs (plus a small handful of sneaky extras) so had put in the work.

It was a longish walk from the south where we’d parked the car near the Robin Hood Gate, across the park to the event village, but a lovely one on a sunny 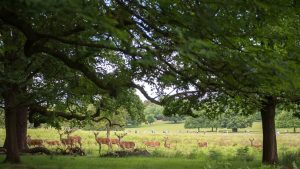 day, with no traffic other than cyclists and a few deer. While Lucy went to investigate whether there was scope to buy an event t-shirt, I queued for the toilets, which gave me opportunity to pin on my race number and sort out my bag and other bits and pieces. The long queue moved swiftly, and after that was sorted I dropped off my bag.

There was no news from our friend Claire whose suggestion this race had been, and who has also been training for it, and so I guided Lucy to my suggested 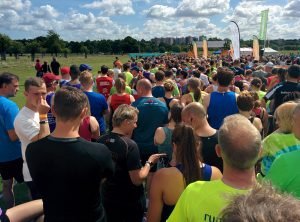 spot for her to watch the start which also allowed for an easy short walk to the 3-mile point, and then I went to my yellow pen, the second of the four pens. It was already getting busy and the 90-minute pacemaker was some distance in front of me, unreachable in the dense mass of people, and I wasn’t much in front of the 100-minute person. I wasn’t looking for a formal pacemaker but it did suggest there would be a fair few people in front of me looking to go more slowly than my 85 to 87-minute target.

The start was delayed by 15 minutes for reasons not explained, but that period did allow for a minute’s silence in memory of those killed last night, and an emphatic round of applause for the emergency services. 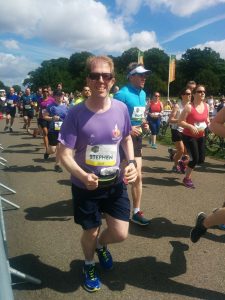 Eventually the first pen was underway, and after a short pause, our pen was too, getting me across the line about four minutes after the gun. It was very busy and slower than desired along the first straight, but once I’d turned the first corner and been cheered on by Lucy, it wasn’t too challenging to start to overtake people, both up the first hill and down the other side. I expected there to be some people a bit slower, but there were some very slow people who really should have been much further back in the fourth pen if that’s all they could manage at the start.

The scenery of Richmond Park is sublime and there was plenty of opportunity to enjoy it as the route wended its way to the south-east corner by Robin Hood Gate and then began its circuit of the park. I found myself running alongside a woman in pink in the second mile, and we more or less matched each other until about 7.5 miles which I think was helpful though with hindsight perhaps caused me to push a fraction too hard, though that was mostly driven by me aiming for a specific time and thus a particular pace on my Garmin. 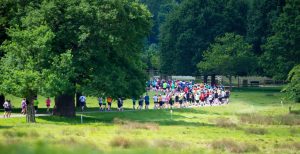 After turning the north-east corner at Roehampton Gate, there began a slow drag of 2.7km gaining 66 metres of height and all into a stiff breeze and increasingly warm temperatures. I waved to Lucy as I passed her, she calling to me from the right-hand-side when I was expecting her on the left. This section was challenging and maybe I pushed too hard here, though once we turned the north-west corner by the Star and Garter Home, the next side was downhill or level so did give time for the legs to recover somewhat, and I did one km in 5:00 and my average speed thus far was bang on target at 5:21/km. 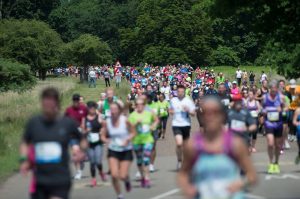 However, turning the south-west corner at Kingston Gate then produced another significant little hill, just 30 metres but at a gradient of up to 10%. The painful ascent was enlivened by tree surgeons sitting in a tree overhanging the road and cheering us on. Great fun but it didn’t have much impact on my legs which had had enough by the time I got to the top, and never regained their freshness. My intermittent companion in pink now pulled away from me, though initially not far. The ascent was followed by a steep descent which improved the speed but didn’t do much to help the legs – long and gradual would have been more helpful.

After a brief circuit at Robin Hood Gate to add a few metres to the route, it was back towards the event village along the outward route, which meant a gentle but persistent 1.7km uphill with another 30 metres of ascent in warm sunshine. I was determined I wasn’t going to walk, but the pace dropped dramatically to around 6:18/km, the lady in pink disappeared into the distance, and I was feeling demoralised as I was passed by dozens and dozens of people whose legs were in better shape than mine. Eventually I crested the hill and the remaining 900 metres were downhill and then level: although easier, my legs were struggling and I could still only manage 5:39 for the 16th kilometre. 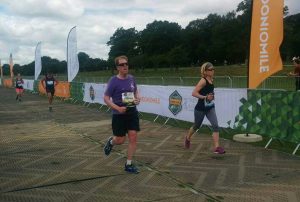 As I approached the final turn into the finish straight, after a run with relatively little support, the crowds suddenly appeared and the air was thick with “Come on Stephen” (names being printed on the race numbers), which was great to hear, and plenty of hands out for high-fives, but it wasn’t really needed by now as it’s always easy to find a last smidgen of energy for the end with the finish line in sight. I passed Lucy close to the finish, and crossed the line in a chip time of 1:28:49, some 98 seconds slower than my PB which had been my primary target and 2.5 to 3 minutes slower than my dream target.

I had given it my all, and as I walked to the table with goodie bags, it was something of a drunkard’s walk, only just managing to propel myself in the right direction without falling over, and having claimed my water, protein drink, fridge magnet and packet of crisps, I had my cherished medal hung around my neck, walked out of the finish zone, and collapsed on the grass. After a short while I recovered enough to have a drink and message Lucy as to where I was. Gradually I recovered strength and after eating my crisps, drinking the water and the protein shake, I went to collect my bag while Lucy queued for some food. 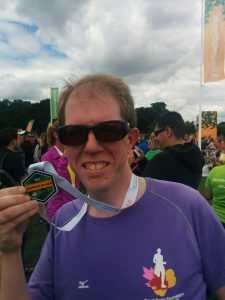 The food queue was lengthy, and though the food was excellent we barely had time to eat it before we went over to the finish straight to wait for Claire who’d had time to post a Facebook message that she was at Mile 9, which we noticed six minutes later. She was a few minutes yet, and we cheered a few others across the line before she appeared, jogging cheerfully, in company with Paul Wright. As her longest run before today was 11.7km, she did very well to finish, though clearly had a few breaks as she had managed to take a lot of photos on her phone including ones at every mile.

So, it is done. I knew it was going to be hilly (by my standards, at any rate – there are plenty of hillier races) but the combination of the hills, the 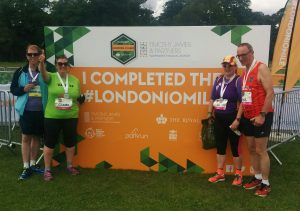 wind in the face on the leg heading west, and the warm temperatures, made the time target prove to be too challenging and in the last quarter I paid for having managed that target pace in the first three-quarters. However, I wasn’t that far off the objective, but nevertheless feel a little disappointed and dispirited. With an objective in 10.5 months which is 2.6 times as far, it also isn’t very motivating about my capacity to run such a long distance, either.

Clearly I need more practice on hills, and I need more long runs both to get my legs more used to distance and to start to reclaim some confidence. Would the two half-marathons I had my eye on in August and September help or hinder that, I wonder?