With all the parkruns in Cumbria having been visited, a Lake District holiday saw me heading south down the M6 early on Saturday to visit Blackpool parkrun. It was probably an unwise thing to do as I wasn’t feeling great and it was a cold morning, but I resolved to run it slowly.

The route is two circuits of Stanley Park, mostly flat with a mixture of gravel/dirt paths through woodland and tarmac in the open, the latter with quite a bit of ice to avoid. I latched onto a group who pulled me round slightly faster than I’d planned but still relatively slowly at 28:21 and my first second-half finish since Mount Edgcumbe in April. 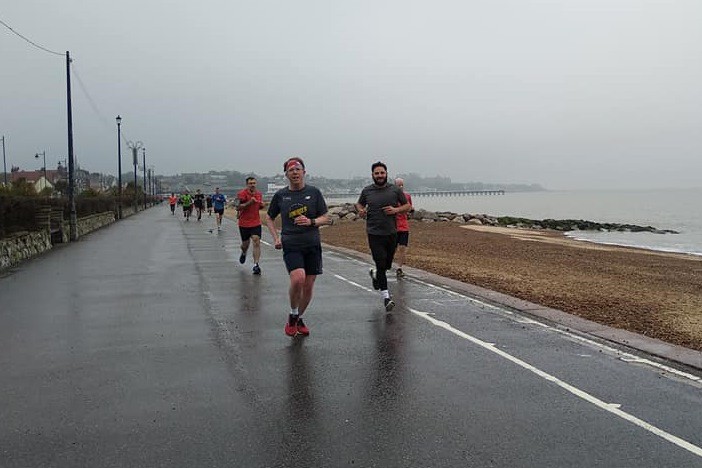 parkrun got rather neglected in the run-up to London. On 28th April I made a return to parkrun tourism, visiting a new course, Felixstowe (my 54th different parkrun, and 90th overall). It’s only their 4th run there, and my first, though I’ve run the route along the prom there quite a few times, and it’s always enjoyable, both because I like running by the sea, and because it’s flat and straight.

When I glanced at my watch after 500 metres or so it was a case of “b*****y hell, better slow down”, which I did a bit, but ran the parkrun faster than expected. After collecting my finish token, I ran a further 900 metres or so to get to the 3.7 miles to #finishformatt, and also knocked a remarkable 75 seconds off my 6km PB (including the stop to collect the token) – my legs are definitely full of life.

The marathon-injured knee briefly muttered at about 1.5km, but then went quiet so I’m hoping that moderation in distance over the next two weeks will allow me to make a decent stab at my 10-mile race in 15 days.

2nd June took me to the fairly new parkrun in Haverhill on the south-west edge of Suffolk to complete the Suffolk parkruns, again. I understand that Sizewell will be starting soon, which should be a lovely course and which it will be a pleasure to have to visit. Haverhill was pleasant enough, and the decent if not exceptional pace set my pulse racing even if the scenery of the playing fields didn’t. Despite some rain, the ground was firm if rutted in places. There were just 68 of us, making it my third-smallest parkrun so far, but a very friendly welcome, good support from the marshalls, and some friendly chat afterwards. I gently pulled my left hamstring on the way round, which is troubling me a little.

Great Denham parkrun on the edge of Bedford was my 56th parkrun location. It’s a very pleasant parkrun, two laps of a fairly new and attractive country park on good paths, very flat. I met a few other tourists beforehand and we had a good chat. The run itself went well – after about 500 metres I found myself running with someone who was going at just the right pace for me, and clearly me for her, and with no verbal communication we had the effect of pushing (or pulling) each other on for the remaining 4.5km. I pulled away by a few metres at the beginning of the final kilometre, but she reeled me in near the end, but I beat her by a second, me finishing with my best 5k time this year and Heather with a PB, both of us having run faster than originally intended. We broke our silence afterwards and thanked each other for being the ideal pacemaker. Each km was fractionally faster than the last, which is my perfect way to run a brisk race.

Pocket parkrun on the edge of St Neots was my 57th parkrun location. It’s a fairly new parkrun, and being on the floodplain of the river it is almost completely flat, but is the second-hardest flat parkrun I’ve done (after the Millom mudbath), with much being on uneven long grass, some more on uneven dirt with tree roots alongside the river, and eight little bridges to cross. And it was a hot morning, 22 degrees at the start, so a challenging little run for me today.