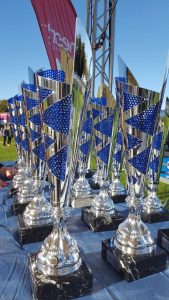 A beautiful day for a run today, the Great Eastern Run half-marathon around the streets of Peterborough. One or two people afterwards complained that it was hot and muggy, but they obviously weren’t in the same place as me – I thought it nearly ideal running conditions: blue skies to start with though more cloud later, about 12 degrees, and the gentlest of breezes.

I recently read a Facebook post along the lines of “things I wished someone had told me before my first marathon” and one of them was the need to pee 19 times before the start. Well, I haven’t quite reached those heights, but after three visits at home, I stopped for another at the Peterborough motorway services which was full of runners with a side order of doggie people (the other group out and about this early on a Sunday morning), then got to the car park in Peterborough in good time. On arrival at the Embankment, I got in the queue for loo visit number five, then checked out the starting pens before rejoining the loo queues for visit number six. I guess it is nerves or excitement, but I can’t say I felt nervous, and while there was a general buzz of anticipation, I wasn’t unduly excited, either. 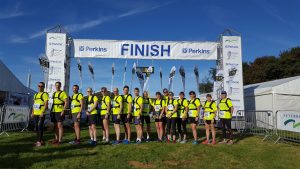 I dropped off my bag and then returned to the starting pens. I was slightly uncertain about which was which: with one labelled “1:50” and another “2:00”, where should I go if I’m aiming at 1:59? I took the former to mean “1:50-something”, and found myself at the front. With the pacers for each pen near the back, I then found myself close to the 1:40 pacer as I crossed the start line, which felt odd. 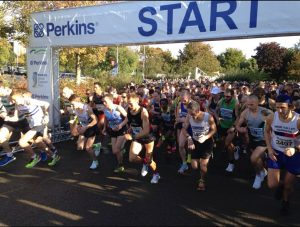 I felt reasonably well prepared for this one, having taken the running easy during the week, and rested fairly effectively yesterday, and with the weather being good and the course being fairly flat, I set off intending to run at my PB pace and see how it went.

I adopted my increasingly familiar “jeffing” approach, running a mile and then walking for forty seconds. Knowing that there were water points at 3, 6, 9 and 11 miles, I flexed things slightly to make sure the water points coincided with walk breaks, which allowed me to take on water at a walk, which is much easier. I also took on gels at 2, 5, 8 and 10 miles.

My aim for PB pace was 5:28/km for the mile-long runs, but in practice they came in at a very even 5:27 or 5:26 pace up to the half-way point, where I felt really good and pushed the pace just a fraction more, cut the walking sections down a smidgen, and found some further acceleration in the last two miles as the crowds grew thicker and noisier: I finally managed to pass the woman I’d been chasing since just before the half-way mark with just 200 metres to spare. My finish “sprint” was subdued but a definite speeding up to around 5:00/km for the last km, which saw me overtake quite a few other runners. 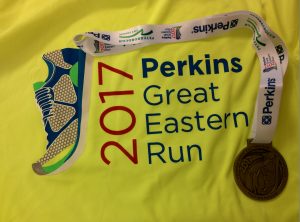 My final time was 1:56:26, knocking 2:40 off my PB, so I was really very pleased with that. And while I worked hard, there was a bit more in the tank on the right day, so we’ll see how I do in 6 weeks’ time at Snetterton.

I then waited at the finish for fellow runner Marion from WeightLossResources who also had also run a great time, on her fourth HM in four weeks she’d run her fastest for two years – lovely to meet her and spend a few minutes chatting.